A Friend In Need by Sue Howes, part 3

A Friend in Need pt3
Originally uploaded by Alice Wood
Parts 1 and 2 of this story were published in Horse + Pony magazine before it ended publication with the August issue. Sue has kindly allowed me to post the rest of the story along with the final two illustrations...

A Friend In Need by Sue Howes, part 3

Gemma waited on Pip behind the barn. She was sure that Mrs Feather would search the woods, once she had phoned Gemmas’s parents to tell them what was happening. Gemma reckoned she had about twenty minutes before her parents arrived to join the search, and she hoped the first search party would leave soon so she could get away. Within five minutes she saw Mrs Feather and Jess leave the yard on two of the school ponies, and head towards the woods. As soon as they were out of sight, she hurried Pip out of the front gate and was soon threading her way through the back streets of the town.

She felt bad sneaking off like this, especially without telling Jess, but she was certain that she would not have been allowed to do it on her own, and to be on her own with her pony was what Gemma desperately wanted. She hadn’t really been alone at all since her accident and she was hoping for an hour or so before she was caught. Her head was filled with Jess’ description of the little valley on the moor, and she decided to see if she could find it.

Jess and Mrs Feather had each taken one end of the track through the woods, looking carefully between the trees. When they met in the middle they were both disappointed, there had been no sign of girl or pony.

“We’ll have to go further afield,” decided Mrs Feather. “Have you got any idea where she might have gone?”
“I did wonder if she might be looking for the place I found the other day,” said Jess, “only it’s a long way away. I don’t think she realised how far it is.”
“In that case, we’d better go back to the stables and change ponies. These two are too old for an extended ride. You can have Otter, & I’ll take Briony. You can show me where but we must stick together, I don’t want two of you missing!”

While Jess tacked up the two ponies, she could hear Mrs Feather talking with Gemma’s parents who had arrived, white-faced and frightened. They were imagining Gemma, fallen from her pony somewhere, unable to move and helpless. They were going to look round the roads nearby, and had already talked to the police.

Jess led Otter out of his stable. If it hadn’t been for the seriousness of the search, she would have been thrilled to be allowed to ride the sleek brown pony. He was the youngest in the yard, at eight years old, and was very keen. Only the most experienced were allowed to ride him. He bounced a little under Jess as she checked her girth, and led the way out of the yard at a brisk walk.

They had been riding for about half an hour when Mrs Feather spotted the first signs that a pony had been that way – a pile of fresh droppings. They hurried on at a trot, the feeling of urgency driving them on. The path cut across the side of a steep hill, and there was a sheer drop down on one side of it. Jess looked down, hoping she wouldn’t see Gemma lying in the bracken below, but thankfully there was no sign of her there.

“It looks like we’re in for some nasty weather,” called Mrs Feather, pointing to the darkening sky to the west. “And Gemma’s coat is still hanging up in the tack room.” She frowned, her face drawn with worry.

As they reached the top of the slope, the wind hit them. It was much stronger than they had expected and Jess shivered, wondering how Gemma had coped with it as it was quite unbalancing. It became hard to talk, with the wind snatching the words away, so they continued in grim silence.

It was then that the rain began. In no time at all it was coming down so hard that Jess lost sight of Mrs Feather. Otter fought Jess, he wanted to turn his bottom into the wind and they struggled on into the storm. She must find Gemma. Just at that moment, a pheasant flew out right under Otter’s hooves, and the pony shied in fright. Saddle slippery with rain, Jess slid out to the side and hit the soft ground with a squelch. She could just make out the pony’s wet brown quarters disappearing into the rainstorm. How would she find Gemma now? 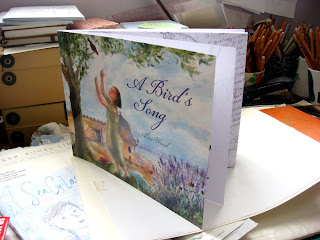 The proof copy of A Bird's Song has arrived back from lulu.com and it's looking quite good. The printing is digital so the colour matching isn't perfect, but for that you need proper CMYK printing presses and thousands of pounds. The binding is secure and well put together. The paper is a good weight with no show-through. I managed to send the pdf file without the bleed setting, because their job option file didn't include it, so there are small white edges on the trimmed sides. I will have to change that next time, but it's only a small thing at this stage. The best thing is that the production cost is reasonable enough to sell it at a market price. All in all I'm pretty pleased with it!

Now I have to do the missing illustrations, and then get another proof. It seems that they only allow the option of selling directly on amazon for certain sizes of their available production options and this one, 9" x 7", is not one of them. I'm not sure why, or if, it matters but that's another thing to think about... anyway - back to work.
Posted by Alice Wood at 12:25 PM No comments: