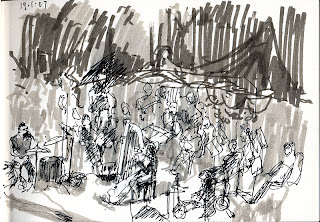 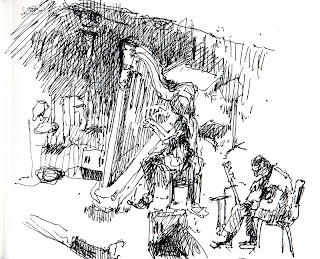 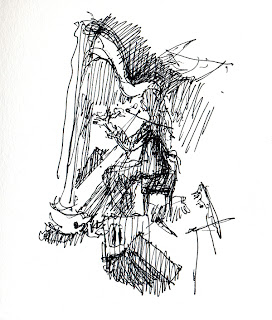 I was very excited about this concert. I had managed to get tickets over Christmas and the Barbican website was nearly sold out. The tickets must have gone in just a few days. As I had mine in my shopping basket someone else bought them and I had to go back and choose the next 2 along the row! Lots showed up on ebay of course, for serious amounts of money. Touts? Who knows. If you could afford that though, it was well worth it.

I am used to hearing an orchestra, and have heard harps with orchestras before, and was a little worried about the sound balance. At the start it did feel a little overwhelming, and I was filled with admiration for the mixing on Ys which is always balanced just right. It seemed to get easier to hear her though, maybe I got used to listening harder. Her voice has changed a little. It was somehow softer to listen too, and more melodious, less raw and edgy, but still with fantastic swoops, pings and whistles. She sounds like the swallows we have on the telegraph wires, they make this great whistling, pinging noise. The whole audience were stock still, and on the edges of their seats. She totally captivates with her performance. She is a wonder of technical ability and sheer creative force. I first heard Sawdust & Diamonds at the ICA when it was so new, she said, it had words missing. To hear it now, fully formed and performed in such a familiar and easy way was a terrific constrast. Drawing was tricky because we were quite a long way back, and she was tiny on the stage. I made some quick drawings of the whole stage with orchestra, and her in context, and a few little line drawings of her and the harp. It wasn't too dark, but when you look at a bright stage and then down at your lap you are temporarily blinded for just long enough to make some invisible marks, and then look back up to the light again. The scene was very interestingly lit, and there were some great shadow shapes. It wasn't really about drawing her so much, as drawing shapes that would hopefully look a bit like the scene afterwards. I like the small one of her guitar/banjo player on the bottom right. Both he and the percussion player were superb. My other half was on the edge of his seat for Bill Callahan's duet (Smog fan). Some new songs were very different again, but with that mesmerising rhythm from African percussion that loops around and repeats into itself like weaving. I'm so excited to hear what she does next.
Posted by Alice Wood at 6:51 PM 2 comments: 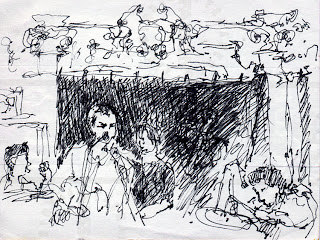 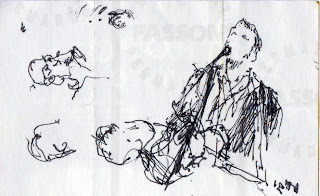 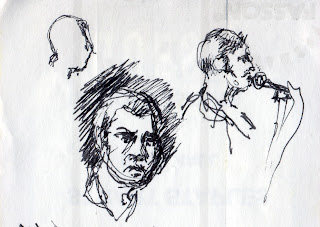 Went out in a rush and forgot the sketchbook. This is such a pain. I've managed to miss out on drawing Joanna Newsom at the Green Man Festival '05, and later on the Tindersticks concert at the Barbican in September. I need one glued to my arm I think. I managed to get hold of a couple of bits of paper, and these terrible scruffy things are the result of my poor efforts. Lovely gig though, and the first time I had seen and heard Stuart on stage. Thomas the drummer is a marvel to watch.
Posted by Alice Wood at 11:34 PM No comments: 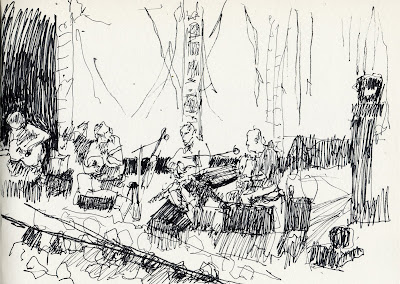 I first heard Planxty when I was working in Reckless Records (RIP) in about 1994. I managed to acquire most of their LP's by the time I left, and they became such absolute favourites that I pretty much knew all the words, and the pronunciations (!) on all the tracks. I used to listen to them when I was working, and they got specks of paint and plaster all over them that I'd have to pick out with a pin when they got too noisy. Records were such a pain for that, but I still love them the best of all. CD's just aren't the same. This concert was amazing. They hadn't played together in the UK for 25 years. To hear Christy Moore sing Blacksmith was just about the highlight of my year.
Posted by Alice Wood at 11:19 PM No comments: 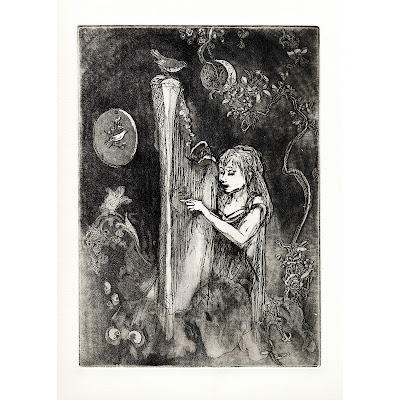 A friend managed to get me in on a guest list after this had totally sold out. I was beside myself. Against the obstacles of childcare, rubbish weather, late trains and having to go out on my own, I made it. I sat in the ICA earwigging the conversations of young hip things while I made my one drink last about an hour. Can't drink too much or I can't draw! This is another venue where there isn't much of a view from the floor. It's standing, and of course all the tall people make a big wall. I'm actually quite tall myself but I'm no match for those 6 footers in cuban heels and cowboy boots. I stood on the ramp at the back of the hall, which I quickly realised was a fire hazard, as the security guards kept moving everyone away. I did my best to be invisible, and for some amazing reason it worked, and they left me - just me - to draw from the only high spot in the place. God bless the ICA security guards! I made lots of drawings, and felt I had enough information to turn one into a print. I spent some time in Artichoke print workshop in Brixton over the winter printing some illustrations for a picture book, and made this etching as an experiment in aquatint. I didn't make a test strip (who does?) and of course totally cooked the plate in the acid and the lovely drawing disappeared in a gloomy black mess. My friend Megan showed me how to scrape it back, and out of the gloom I rescued this weird ethereal image. It's a bit like some old story book illustration from some volume of Fairy Tales, but I like it. The pen and ink drawings are much more considered than anything before them. It helped not being jostled, and not having to wait for a gap between someone's elbow and beercan for a glimpse of the subject! 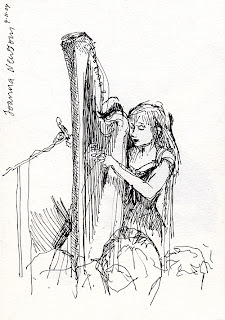 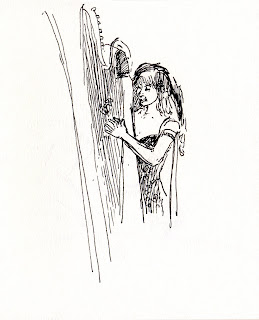 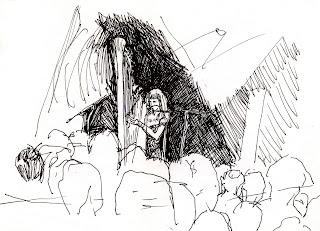 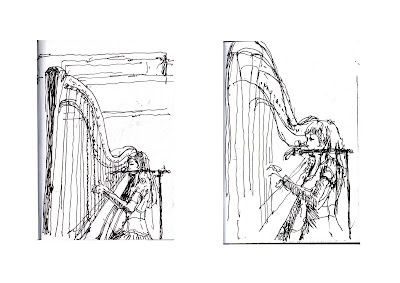 This was the first time I had heard Joanna Newsom play live. I think the first time I came across her was in a magazine called Careless Talk Costs Lives, and I was intrigued by the photographs, and the interview, the instrument and just her really. She spoke very beautifully about her dedication to her music. I must have got the Milk Eyed Mender LP before this gig as I knew all the songs by then. Her work is pretty irresistible for me. The harp ties in to bardic story telling traditions of early British history, and the long narrative lyrics are totally wonderful when you are in the business of telling and illustrating stories. This gig was late, and rather squashed. We saw Smog first, and when she came on there was a terrific rush of people to the stage. She appeals to men of a certain age who are all, unfortunately for me, rather tall. Some even wear hats, and sway around to obstruct the view. Pretty difficult drawing conditions really. I noticed a balcony but didn't manage the adventure of finding my way to a better vantage point. I didn't want to miss the music. I've never had any difficulty listening to her voice. I am a fan of a lot of 'unlistenable' vocal techniques, possessing a large collection of Topic LP's of wonderful old voices captured over the last 100 years singing ancient folk songs. I particularly love Shirley Collins, and I find the honesty and untrained purity of her voice completely addictive. It makes your hairs stand on end.
Posted by Alice Wood at 10:23 PM No comments: 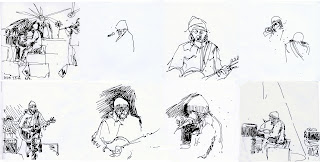 This was a treat really. Fantastic seats, and really great performance. Around the back of the stage were sunflowers in pots, alternately dead and alive. Of course he wore the woolly hat, and it was August and boiling. I could not believe he managed to keep it on the whole time. I had taken the daftest tiny sketchbook that was only about 3 inches square so this was a bit of a feat in the dark. I wonder if I could get away with paints of any kind.
Posted by Alice Wood at 10:14 PM No comments: