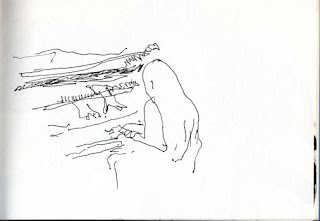 Last night I went to see Joanna Newsom at the Royal Festival Hall. It was a last minute thing as it was sold out, but they suddenly released some tickets (in the choir behind the stage) and I was quick enough to get two. Not the comfiest of seats, our budgies would have had trouble perching on those benches for a couple of hours, but it was worth it.

The lights were all aiming back towards us (for the benefit of the auditorium), so my view was mostly backlit, and very bright. The visual acrobatics of looking into this and then, blinded, down to a little piece of paper were a bit demanding, and I couldn't really see what I was doing. I abandoned the fine pen for a thick black brush pen, and it just about made enough of a mark in the dark to get some idea of what was going down! The action of drawing while watching/listening is very rewarding as it commits music to memory in a very anchored way, the two activities performed together demand proper concentration and coordination. One's mind is prevented from wandering about.

There was a drummer, a guitar/banjo/recorder player who did the arrangements on the new record, a trombonist and two violin players (I should have written down their names). JN played the piano and the harp. She started with '81, alone on stage, just her with the harp. Lovely, and my favourite song on the new LP, then they went on with Easy, Good Intentions and Have One On Me. A couple of older pieces made it in, Bridges & Balloons, and the Book of Right On. I particularly enjoyed hearing Monkey & Bear live for the first time. I liked the way her hands were reflected in the shiny black polish of the piano as she played, like a duet in a mirror. 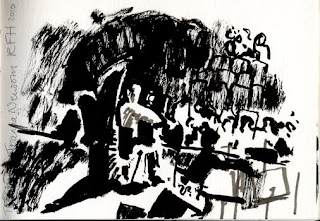 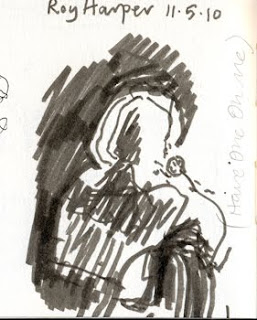 Roy Harper, one of my favourite, proper songwriters played first and he was brilliant. An amazing guitar player. Just great to hear him sing Another Day after all these years. We had to stop ourselves calling out for Hell's Angels though and giving ourselves away as proper old gits. I was struck suddenly by the similarity between J Newsom's album cover for Have One On Me to that old hippy classic Flat, Baroque and Berserk. She likes Roy Harper, but then he is a poet too. The thing behind him in the drawing which looks like a giant oven glove is the harp in its cover! 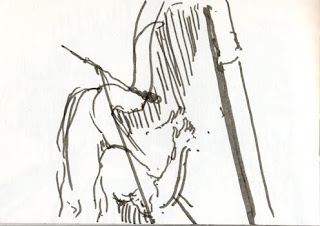 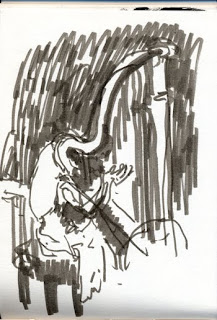 As we left the Festival Hall, and people turned on their phones, the news slowly crept through the crowd that David Cameron had become Prime Minister while we weren't looking. There was palpable disappointment. To quote Roy Harper...

Fabulous drawings Alice! Sounds like an exciting evening... The sketches really let you get a glimpse of the atmosphere!